Walk into a Dutch supermarket and you might just see this worrying sight: 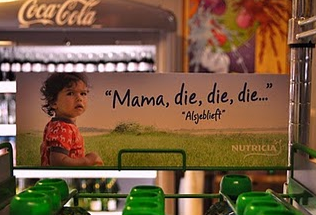 It doesn’t help that the words “Mama, die, die, die…” are set next to the image of a slightly angry-looking child, but this ad didn’t particularly phase the Dutch, only the unfortunate anglophiles who come across it. In its original language it is of course far less sinister, being a child’s request for her mother to buy her “that and that and that” (form what I’ve been told, I don’t speak Dutch).

Not exactly a terrible translation, rather an unfortunate cross-language homograph, but a clear example of what can happen when the advertising world doesn’t consider multilingualism. It’s worse, of course, when you’re trying to sell your product to a global market, but you fail to realise that your lovely new car, the Chevrolet Nova, translates to Spanish buyers as the Chevrolet “Doesn’t run”.

There are others of course, like Nokia’s Lumia phone which translates to a slang word for ‘prostitute’ in Spanish, ‘Gerber’ baby food means ‘to throw up’ in French; and Microsoft’s ‘Bing’ which is a homophone for ‘illness’ in China.  And those are the less rude ones. Check out some more amusing and unfortunate brand translations here.